Anger in Tbilisi over reasons for deadly flood

Anger in Tbilisi over reasons for deadly flood 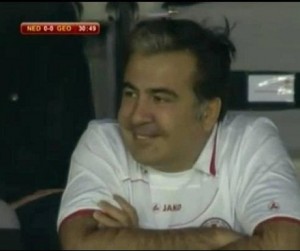 The day after his hometown Tbilisi was struck by a natural disaster, President Mikheil Saakashvili went to Slovenia to watch a football match. Local residents say the government should have done more to prevent what happened. (Screenshot from Eurosport.)

TBILISI, DFWatch – Opposition representatives in Georgia say the flood that took five lives Sunday could have been prevented.

The discussion led to a street scuffle between a district governor and an opposition party representative.

Besik Gazdeliani, Deputy Governor of the Samgori district in Tbilisi, had come to meet local residents near the affected area, a challenging mission, since many people believe the disaster could have been prevented if the government had taken measures.

In addition, a group of the opposition politicians from the Free Democrats party turned up. Tato Galdava, head of the Free Democrats in the Krtsanisi district, says that Gazdelian became uneasy when journalists arrived with cameras.

Then Gazdeliani got angry and attacked the opposition representatives and several locals. The incidence was captured on video.

“I’m Deputy Governor Besik Gazdeliani, from day to night I’m here and what reprimands you have I don’t know, you impudent,” he shouted, and added, ‘don’t you see us working, and we are covered in mud?’

But one resident reminded him that the president was not in Tbilisi, but had gone to watch football in Slovenia. It was the European junior championship, where the Georgian team played against a team from the Netherlands. President Mikheil Saakashvili was criticized as a screenshot of him watching the match was spread across the social media.

The mention of the president’s absence made Gazdeliani angry, and he approached crowd and started shouting and beating them.

Later Tbilisi City Hall released a statement condemning the actions of Gazdeliani, warning each employee of City Hall to avoid such behavior and be patient.

Today, the Public Defender called on law enforcement bodies to react to the incident, and the lawyers group GYLA released a statement asking for an investigation, because video footage which was reported on number of broadcasters clearly indicates that there took place law violations.