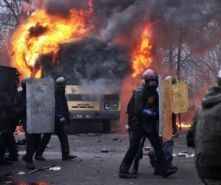 Davit Kipiani, a young National Movement activist, was found dead at Khreshchatnik. His bullet proof vest had two bullet holes after he was hit by a sniper.

Mikheil Saakashvili, the former president of Georgia, said he met Davit in Kiev, and that he had left his wife and one year old child in Georgia and spent his own money to go to Kiev and live in the camps dubbed Euromaidan.

“Davit was a member of UNM, but he went to Kiev without any political or party interests. […] David fought for Ukraine, which means he fought for Georgia,” the ex-president said.

Kipiani is the second Georgian who dies in the political turmoil in Ukraine. The body of another Georgian, Zurab Khurtsia, was transported to Georgia today. He was suffering from diabetes and died two days ago from a heart attack.

Protests started in late November against President Yanukovich’s refusal to sign a trade pact with the European Union. Events took a violent turn in mid January, after parliament passed a law severely restricting the right to protest. It was later repealed.

Radical Ukrainian nationalists are driving the clashes and refuse to listen to opposition leaders calling for calm. Violence reignited three days ago, with guns and snipers seen on both sides.

According to Ukraine’s Health Ministry, 75 persons have been killed in Kiev in the last four days. 58 dead bodies have been identified. 363 out of 571 injured have been hospitalized.