Georgia turns to Interpol in hunt for torturers

Georgia turns to Interpol in hunt for torturers 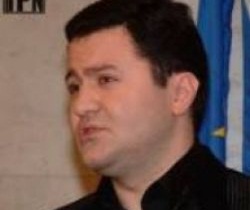 Georgia is turning to Interpol for help finding Data Akhalaia, former head of the secret police, who is to be charged with torture. He left Georgia after Saakashvili's election defeat. His current whereabouts are unknown. (IPN.)

TBILISI, DFWatch — Four former officials from the Interior Ministry will be charged with illegal deprivation of freedom, torture and abuse of powers.

Chief Prosecutor Archil Kbilashvili said at a briefing Friday that former Deputy Defense Minister Data Akhalaia, Soso Topuridze, Geronti Alania and Oleg Melnikov, who are not in Georgia at the time, will be charged. The prosecutor says they will be officially charged on Saturday and it may possible to find them through Interpol due to the serious charges.

The four have held high positions at the Interior Ministry and had large influence. The things they now are charged with were publicly known at the time, and the opposition demanded that they be investigated, but instead the Saakashvili government promoted them.

After the election on October 1, when Saakashvili’s party lost, they left the country. Their location is unknown.

Archil Kbilashvili says they are accused of beating an employee of the Interior Ministry’s Tbilisi department. Some of them are implicated in the murder of Sandro Girgvliani.

There are new conditions, testimonies, new data regarding the Girgvliani case, Kbilashvili said, which is still unknown to the public, but he didn’t offer more details.

Sandro Girgvliani, 28, was discovered dead January 28, 2006 in a suburb of Tbilisi, with multiple injuries which were the result of violence. This is one of the most controversial crime cases in recent Georgian history, partly because the wife of Vano Merabishvili, former Interior Minister, was implicated as well as the above mentioned officials.

This murder caused criticism against the government, especially the interior ministry, and made people doubt the courts’ independence and the effectiveness of the reforms conducted by the government. Despite it being a demand from society, the president did not raise the question of holding the Interior Ministry or the people involved in this case to account, but instead they were let carry on in their high posts with great influence.

The mother and grandfather of the murder victim for years tried to get justice, but both died even without making it to court. No-one in Sandro Girgvliani’s family are alive today.

According to a ruling by the European Court of Human Rights on April 26, 2011, the government had to pay 50 000 for moral damage. The court remarked that it was astonished by how the local courts and the prosecutor’s office were trying to define the main conditions of this case.