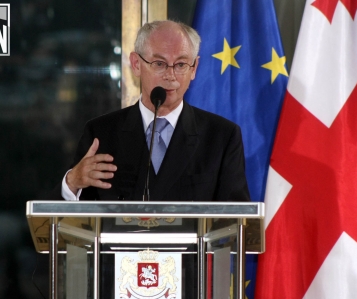 TBILILSI, DFWatch–Georgia will sign an association agreement with the EU on June 27.

Prime Minister Irakli Gharibashvili announced the date at a meeting with Herman Van Rompuy, President of the European Council.

“We received confirmation that Georgia will sign the agreement on June 27,” Gharibashvili said.

He added: “Rompuy’s visit to Georgia is a great honor for us. This visit confirms that the EU supports Georgia’s Euro-integration process.”

Most of political debate in Georgia lately has centered on the signing of the association agreement, as some fear Russia could try to obstruct the signing, considering what happened in Ukraine.

Rompuy confirmed that there is great pressure to interrupt the process of integration, but the process continues.

“Though outer pressure is very serious, we continue our politics to have good and strong relations with Russia’s neighbors,” Rompuy said.

He said the EU’s policy toward Russia is successful.

“If we didn’t have a successful policy toward Russia, I would not be in Georgia now and the association agreement would not be signed too. […] Of course, there is an encroachment of the territorial unity, but this does not hamper the continued association policy with [the EU’s] main partners, and Georgia is one of our main partners.”