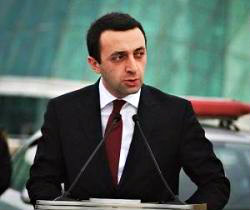 TBILISI, DFWatch–The Georgian interior minister says that an archive of secret recordings of people’s private lives will be destroyed next week.

Minister of Internal Affairs Irakli Gharibashvili said this during a public meeting at the Center of European Politics in Brussels.

“This archive is an example how the previous government worked and what methods they used against people, not only the opposition but against their own,” he said, adding that this is a shame.

The minister said that the archive will probably be destroyed on Monday or at least no later than one week from now.

Gharibashvili also said that he proposes an amnesty for people who have copies of illegally gained footage.

“They should send this material within a month, but if they don’t do this, we will reveal such people and punish them in accordance with the law.”

This time the minister didn’t specify if the archive will be destroyed partly or completely. More than a week ago, the judiciary and human rights committees in parliament discussed this issue publicly also agreeing that the footage must be destroyed.

During the Soviet Union, the secret police, KGB, collected compromising material about people’s personal lives, such as sexual activities. During the Saakashvili regime, similar methods were used against political opponents and others. Recently, an official in the Interior Ministry was detained for publishing a compromising video.