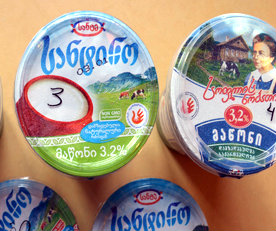 A study earlier in 2014 found that many milk products contain vegetable fat. Now the contents of matsoni will be regulated by law. (for.ge)

TBILISI, DFWatch–A new law will regulate the quality of the Georgian milk product matsoni, a kind of a fermented milk similar to yogurt.

The purpose is to protect matsoni as cultural heritage and ensure the best quality of the traditional product.

In a new draft bill about milk products prepared by the Agriculture Ministry, a separate passage defines how matsoni is to be made.

It says that only a product produced from a base consisting of lactic acid bacteria strains, and only from fresh milk from Georgian territory, can be sold under the name of matsoni.

The new rule will come into force six weeks after the bill has been signed into law. When in force, companies won’t be allowed to sell matsoni produced from vegetable fat.

The ministry explained the reason for the decision as the necessity to protect cultural heritage. It is important to protect matsoni as a traditional national product like the cheese sulguni, sweets churchkhela or other dishes, the statement says.

Early this year, Center for Strategic Research and Development examined fifteen types of milk products, and ten of them turned out to contain vegetable fat.