Georgia to make US embassy into presidential residence

Georgia to make US embassy into presidential residence 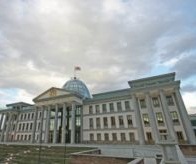 TBILISI, DFWatch–The government in Georgia is considering using the former US embassy in Tbilisi as presidential residence after the election on October 27.

It’s unclear what would happen to the current presidential residence in Avlabari in the old part of Tbilisi. This is a domed complex built by President Saakashvili towering on a cliff above the city center and has been subject to much criticism for its high cost.

Davit Narmania, Minister of Infrastructure and Regional Development, on Friday told Georgian Public Broadcaster that the new president’s office will be a ‘modest’ office with a staff of 240.

The government has not yet decided what to do with the president’s palace in Avlabari. In 2009, there was a report in Georgian media, quoting anonymous sources, that the palace cost few hundreds of million to build, but the president denied this and claimed the price tag was not more than USD 13 million.

In an interview with Rustavi 2 TV last week, President Saakashvili said that he thinks it will be better if the prime minister and the rest of the government will be located in his palace in Avlabari after presidential election.

He drew attention to the fact that after the presidential election, the power of the president will be reduced and that of the government and prime minister will increase; it would therefore be better for them to use the palace.

Saakashvili added that he only plans to bring with him awards or diplomas when he moves out of the palace. Presents in gold and silver will remain there, as he thinks they belong to the state.