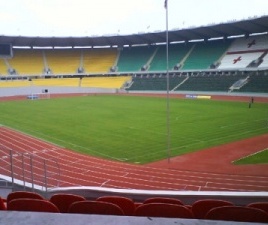 TBILISI, DFWatch – Georgia will host UEFA Super Cup in August 2015. This will be the first time Georgia is host country for an UEFA event.

According to the Georgian Football Federation, the decision was made in Kiev on Saturday at a session of the executive committee.

Monaco was not chosen as host for UEFA Super Cup, which will be held annually in different cities. In 2013 it will be held in Prague.

In Tbilisi, Mikheil Meskhi Stadium will be used for the tournament’s matches. The arena lies near Vake Park and has a capacity of about 28 000 persons.

The negotiations to choose a host for the cup has lasted about a year and a half.

A preliminary target date for the match between the winner teams of the Champion League and Europe League is August 14, 2015.

The teams will arrive in Tbilisi one weak earlier and participate in various events as they prepare for the match.