Georgia to have control over Monastery of the Cross

Georgia to have control over Monastery of the Cross 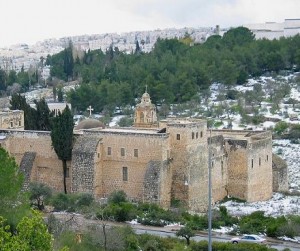 The Monastery of the Cross, which was built in the 11th century and was a Georgian cultural center through the Middle Ages, might be subordinated t the Georgian Orthodox Church again, after centuries under Greek control. (Photo: Ester Inbar.)

TBILISI, DFWatch – The Monastery of the Cross in Jerusalem, which in its time was built with the support of the Georgian king and for centuries was considered a Georgian cultural center, may placed under Georgian control.

The Georgian president Mikheil Saakashvili announced this on February 25 in Gori, a town city located just a few kilometers south of the border to South Ossetia, a breakaway republic currently occupied by Russia. In his speech at the David the Builder’s National Defense Academy, he focused on the condition that Georgian historical and cultural monuments are in.

Saakashvili said he will specifically set up a team working to return the Georgian Holy Cross Monastery. He said the Georgian embassy in Israel is also involved in this process and is instructed to seek close cooperation with the Israeli government.

According to historical sources, the Monastery of the Cross in Jerusalem was built in the XI century with the support of the Georgian King Bagrat IV, during what is considered Georgia’s Golden Age. The church later became a main assembly point and shelter for Georgians living in Palestine; religious and cultural activity center for Georgians living in Jerusalem, a warehouse shelter and important place for educational and artistic activities.

Since then, Georgians managed this monument and it was considered a Georgian cultural center, where famous medieval Georgian erudite were working, there were cultural literature activities and handwriting of manuscripts. The manuscripts that have survived are currently preserved at the Jerusalem Antioch Library, some are on Mount Sinai, others in places like Tbilisi, Kutaisi, Saint Petersburg, Vienna, Paris, London and Washington.

At the end of the XVII century, the Monastery was transferred to the Greeks along with the other Georgian cloisters and subordinated to the Patriarchate of Jerusalem. The Greek Theological Seminary was opened here in 1855, active until 1908.

In 1960s the fresco with the Georgian inscription of Shota Rustaveli, the famous Georgian author of the poem Knight in the Panther’s Skin (XII century); was covered in paint. This is the only fresco of Rustaveli which has survived.

In 2004 unknown persons deleted the face of Shota Rustaveli fresco in the Monastery. The case became an international scandal. Later, in connection with a visit by the Georgian president to Jerusalem, the fresco was restored, but the restoration wasn’t carried out by the specialists, the first version of the fresco’s face is today lost.

In 2010, the Shota Rustaveli memorial near the Monastery of the Cross in Jerusalem was destroyed. The damage was officially blamed on foreign tourists.

Last year, the Georgian Patriarch, Ilia II, visited Jerusalem. He met with government officials and church leaders; but there is no information whether they discussed this topic or not. On February 26, he stated to his parish that he hopes old times will return when the Georgians worked in the holy land.