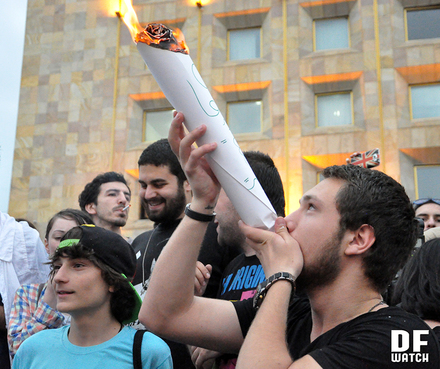 TBILISI, DFWatch–Hundreds of people, mostly youth, gathered Monday outside the government office in Tbilisi to demand decriminalization of marijuana.

The rally started at 18:00 in the evening. There were no speeches or appeals. People were dressed in green colors and had brought with them posters. For about two hours, they stayed there and played loud music. There was also symbolic smoke and several performances.

Rallies were held Monday simultaneously in Tbilisi, Kutaisi, Batumi, Samtredia, Bolnisi, Bagdati, and also in Berlin, New York and in Kinna near Gothenburg in Sweden.

On Saturday, there was a demonstration in support of Beka Tsikarishvili, a man who risks up to 14 years in jail for using marijuana.

June 2 last year a rally was also held, and in Georgia this date has become the name of the movement to decriminalize marijuana. Their message is that civilized countries are no longer jailing people for using the drug.

“A year after the first rally, we, citizens of Georgia who think it is unacceptable to jail a person for trying marijuana, gather once again to remind the government about their promise,” organizers of the rally said.

And it appears that their rallies have not gone unnoticed. Health Minister Davit Sergeenko said on Monday that the strict punishment for using marijuana will be ended, and that the ministry is working on a new document about drug strategy in Georgia, the first draft of which will be presented within a month.

“There was inadequately strict attitude towards soft drugs, while the attitude was too liberal to pharmaceutical drugs,” he told journalists, adding that the strict attitude must change and the whole drug policy needs to be fixed.