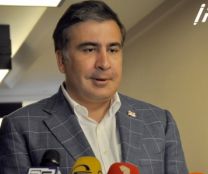 TBILISI, DFWatch–The Prosecutor’s Office in Georgia is preparing to ask Interpol to issue a red alert for ex-President Mikheil Saakashvili and declare him internationally wanted.

In mid-August, Georgia announced a domestic search for Saakashvili, which means that if he comes to Georgia he will be immediately detained.

The former leader left the country right after the presidential election in October, 2013, and didn’t attend the inauguration of his successor Giorgi Margvelashvili.

Saakashvili is currently in Turkey with his family.

On Saturday, he went to the border between Georgia and Turkey near Sarpi in order to meet with members of his party the National Movement. He posted photos from the meeting on his Facebook page.

Saakashvili is charged in three different cases, including the dispersal of an anti-government rally on November 7, 2007, and breaking into Imedi TV office, and also embezzlement.