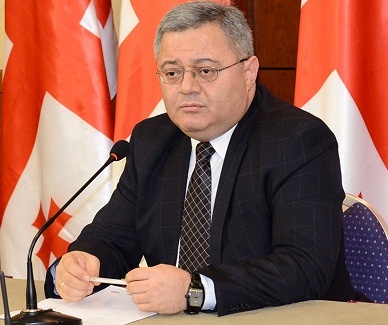 TBILISI, DFWatch–In Georgia, a new Constitution Commission is preparing a draft of constitutional amendments that will balance the branches of power. It will start work in the second half of January, 2014.

Speaker of Parliament Davit Usupashvili said this on Monday during a press conference to sum up the year 2013.

The current edition of the constitution was adopted in 1995, but tens of constitutional amendments have been passed since then. Twice, major changes were made to the constitution and both times by the initiative of ex-president Mikheil Saakashvili.

First time was in 2004 after the Rose Revolution, which brought him and the National Movement party to power. According to that amendment, the power of the president significantly increased, which was subject to criticism in the following years.

In 2010, another amendment was adopted; this time the power of the president was reduced, while the power of the prime minister increased. Many saw this as preparations for Saakashvili to take over the post as prime minister after he had served out his second and last presidential term and be unable to run for president again. This scenario was no longer an option when a new player appeared on the political playing field.

Bidzina Ivanishvili’s political coalition won the parliamentary election in October 2012 and formed a new government, with himself as prime minister. Ivanishvili’s coalition criticized the constitution and promised to amend it as soon as they came into power, but it took a year before a constitution commission was created.

It was finally formed a few days ago, and Usupashvili said it will start work from the second half of January. The commission will present a draft to parliament before September 1, 2014.

The parliament speaker said the commission has about 60 members and in addition there will be created a board of advisers.

“We will invite people of different professions to the board of advisers,” he said. “The constitution is not the business of only lawyers.”

He continued saying that the constitution is a document about a state and a state is a complicated and complex issue, so historians, political experts, management specialists, psychologists and other people are necessary.

“This will lead us to the final result when every word will have weight,” he added.