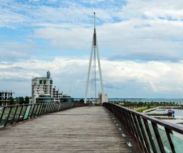 TBILISI, DFWatch–Georgia plans to build an international airport in Anaklia, a beach resort on the Black Sea next to the breakaway region Abkhazia.

Giorgi Kvirikashvili, Minister of Economy, said at a briefing December 25 that a plan developed by the previous government to build an airport in Poti has been canceled. He said the Poti airport project was wholly infeasible, because the location selected for it is a wetland.

Kvirikashvili further explained that the plan for constructing an airport near the port in Anaklia has been prepared and is ready, and it is not necessary to have two airports in the same area.

He added that Anaklia airport will have special capabilities for transferring goods.

The port in Anaklia was part of the previous government’s plan to build a new city called Lazika. It was former president Mikheil Saakashvili’s idea to construct an entirely new city and populate it with half a million people. The current government criticized the idea when they were in opposition, claiming it was unreasonable to spend money on constructing a new city.