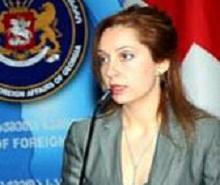 Nino Kalandadze, spokesperson for Georgia's foreign ministry, says it is categorically unacceptable of a German diplomat to say that Georgia should "admit its mistakes towards enemies and victims, as Nazi Germany did in its time". Dieter Boden denies having said it. (Official photo.)

TBILISI, DFWatch – Georgia has broken off relations with a distinguished German diplomat, alleging he compared the Saakashvili regime to Nazi Germany.

Dieter Boden, who negotiated a peace plan for how to solve the conflict with breakaway Abkhazia ten years ago, told German newspaper Süddeutsche Zeitung that a planned visit by a 15 strong delegation to Georgia was canceled because President Saakashvili became aware that he was among them.

Apparently, Boden’s peace plan, which did not come to fruition, is unpopular among Saakashvili’s power circles.

After becoming aware that Boden was coming, the Georgian leader is said to have demanded that the peace negotiator and Viola von Cramon-Taubadel, Bundestag representative for the Greens, were removed from the delegation, or else the whole visit would be canned, according to Boden.

A spokesperson for Georgia’s foreign affairs ministry denies Boden’s account of events, but says ‘cooperation with Dieter Boden in any form on an official level will be restricted.’

Georgian news agency Pirweli reports that Dieter Boden himself contacted them and sent them the article in Süddeutsche Zeitung, titled ‘Invitation Cancellation’, which explains the reasons for why the planned April visit failed.

‘This week, a 15 member delegation of politicians, officials and experts from USA and Europe wanted to arrive for a six-day visit to Tbilisi and separatist Abkhazia. However, two members of the delegation received a letter of apology from organizers – Robert Bosch foundation and German Marshall Fund. ‘Our delegation composition to some extent got criticism.’ They said. This is a paraphrase for diplomatic scandal which the German Foreign Affairs Ministry is working on at the moment. Criticism comes from Georgian President Mikheil Saakashvili. In fact, he wanted to host the group but when he learned that former diplomat Dieter Boden and German Bundestag Parliament member of Greens Viola von Cramon are part of one game, he informed German Marshal Fund president Craig Kennedy that if they wouldn’t cancel the invitation of those two, he wouldn’t host anyone of this delegation, no matter their rank. Funds canceled trip and complained with letters to Guido Westerwelle, German Foreign Minister and Georgian Foreign Minister Grigol Vashadze,” according to the German newspaper.

The article’s author, Daniel Brössler, explains who those members of the delegation are, who were refused to come to Georgia.

Dieter Boden is an experienced expert on South Caucasus issues. In 1995-1996, he was the head of the OSCE Special Mission in Georgia, and in December 1999 was appointed Special Representative of the UN Secretary General on the Georgian-Abkhaz Conflict and worked in this position for two years and a half. He was head of UNOMIG in late 1999 and early 2000s. Ten years ago, he led negotiations organized by the UN which led to a peace plan for Abkhazia, which has come to be known as the Boden plan.

The article in Süddeutsche Zeitung says he suspects that they are putting pressure on him over in Georgia because he goes too far in understanding Abkhazia.

Viola von Cramon-Taubadel is speaker for the Greens in the Bundestag and has called for closer relations with Georgia, but also expressed the view that the EU should have cautious contacts with Abkhazia and South Ossetia, which is unforgivable in Georgia’s view, Brössler writes.

Canceling this trip, Cramon-Taubadel says, is ‘a missed chance’. She appeals to Saakashvili that ‘Democracy isn’t created with PR and marketing.’

As the story hit the Georgian news cycle, a clearer picture started to emerge about what lay behind the Saakashvili regime’s hostility to the seasoned diplomat.

“The Georgian president doesn’t restrict anyone. As for Boden’s approaches, his statement that Georgian territorial integrity is an illusion and Georgia should apologize to Tskhinvali and Abkhazia for the conflicts, is to say it softly non-correct. So it will be difficult to cooperate with him, but it doesn’t mean that we disrupt any visits or implementation of projects,” the Georgian president’s spokesperson Manana Manjgaladze said.

Nino Kalandadze, Georgian Deputy Foreign Minister, remarked that the Marshal Fund informed Georgia that they made this decision to cancel the visit. The reason given was that Dieter Boden was part of the delegation.

“Incorrect information was released, as if we in any form disrupted the delegation’s arrival to Georgia and their visit was in any form blocked,” she said.

Deputy Minister Kalandadze says Dieter Boden publicly criticizes Georgian initiatives which are agreed with Georgia’s international partners, and that he considers the Georgian government’s strategy towards the occupied territories as an illusion.

“He says that Georgia should finally admit its own mistakes towards enemies and victims, as Nazi Germany did in its time.”

This is a position which is categorically unacceptable for Georgia and for any Georgian, Kalandadze added, and said cooperation in any form with Boden will be restricted on official level.

“It’s hard for me to imagine in what form it is possible to continue cooperation with this person.”

Despite this, she says Boden can come to Georgia any time with any status. The only condition, foreseeing all arguments, is that in case Boden’s should arrive as part of a delegation, Georgia would avoid high level meetings with that delegation.

“We are ready to host delegations any time, including with composition where there are persons critical to the Georgian government, have different positions on the current situation than official Tbilisi, but the issue shouldn’t be about principle and fundamental topics, which will be completely unacceptable for Georgia. If it will be about Dieter Boden again, our choice that we won’t meet him on a high level will still be valid,” she added.

Dieter Boden told DF Watch by phone that he doesn’t know what Kalandadze is referring to when she claims that he compared Georgia to Nazi Germany, but that it might be a reference to a visit he made to Tbilisi in November 2010, when he made a comment during a discussion about the importance of learning from history. But it is totally wrong to assume that it was meant as a parallel to Nazi Germany, and he never intended anything like that, he told us.