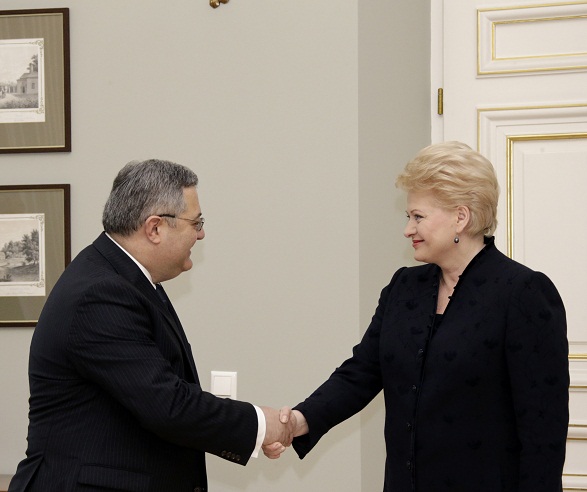 TBILISI, DFWatch–Speaker of Parliament Davit Usupashvili yesterday finished a one week visit to Lithuania and Latvia.

He said Georgia’s friends are ready to support its integration with Europe at the summit of the Eastern Partnership’s in Vilnius November 28-29, and at next year’s NATO summit, about signing and ratifying an Association Agreement with the EU.

While summing up his visit, Usupashvili said that both countries want to assist Georgia on the way to Euro-integration.

“We see unprecedented assistance from them for Georgia becoming a member of Europe,” he said. “Latvia and Lithuania are the most active members of the EU which support enlargement of the EU.”

Usupashvili also said that in the context of Euro-integration Georgia considers plans and discussions in order to find ways to end the occupation.

During the visit, the Georgian delegation discussed the recent presidential election, and current political events including the constitutional reform.

The parties discussed bilateral relations and issues of future cooperation.

Latvian Foreign Affairs Minister expressed concern about restoration of Stalin monuments in several Georgian villages after the change of government.

He invited to “get acquainted with Latvia’s experience in raising awareness and building knowledge on complex historical issues.”

“As the parties discussed Georgia’s domestic policy, Foreign Minister Rinkēvičs emphasised that the European Union was closely following court proceedings against former Georgian officials,” statement of the Foreign Ministry of Latvia on the meeting reads.

A meeting with President Grybauskaite of Lithuania dealt with preparations for the Vilnius summit, ongoing reforms and the recent presidential election. The president said it is necessary to implement reforms on the way to seeking visa liberalization with the EU. She said right now the preparations for the meeting in Vilnius are going ‘smoothly.’

“The summit is expected to see the initialization of an Association Agreement with Georgia, including a free trade agreement,” a press release from the meeting reads.

The president also said that on the way toward EU, Georgia must ensure that there is no selective justice or abuse of political opponents, and have transparent legal proceedings, fair trial and the rule of law.

“The situation of minorities also needs to be improved. Other necessary steps include adoption of anti-discriminatory and data protection laws and fighting corruption,” she said.

The parliamentary delegation of Georgia included members of the ruling coalition and the opposition. They will return on Saturday.