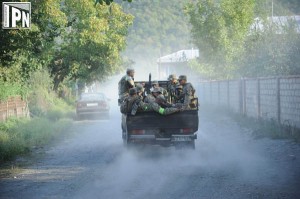 Tbilisi, DFWatch – Georgia says a serious border incident which led to fourteen deaths can not be a reason for Russia to intervene.

Despite witness accounts from the Georgian side, Russia’s secret police, the FSB, which also controls the borders, does not confirm that armed groups has passed border between Russia and Georgia the last few days.

“The Border Service has not observed any breach of the border in the The of the intersection of the Dagestan section of the Russian-Georgian border,”  Vadim Shibaev, deputy head of the public relations center for FSB, told RIA Novosti.

“In Tbilisi, from time to time such provocative statements are made that exacerbate an already difficult situation in the Georgian-Russian border,” Interfax quotes a representative from the Russian Interior Ministry saying.

But Russian media on Wednesday reported that a group of militiamen that took hostages in eastern Georgia were from the volatile Dagestan region and had fled from Russian federal forces and Dagestani law enforcers.

“The armed group the Georgian security forces have been fighting with for the last few days has moved into the territory of Georgia from Dagestan, and its members are from the so called Tsuntin group [of Islamist militants],” a source in Dagestani law enforcement bodies told RIA Novosti on Wednesday.

“If they want to go back, we will ‘meet’ them here,” – the source told Ria Novosti. He also said that thesituation is normal on the Russian side of the border and no other special measures are planned so far.

According to the latest official information, three Georgian servicemen and 11 rebels were killed in the clashes near the Georgian-Russian border. All hostages have been released.

Georgian media keep reporting about movement of additional vehicles to the border, including one ambulance. According to the latest information, two more military vehicles entered the valley near the border, from Georgian side.

The Secretary of Georgia’s Security Council, who is considered an important figure in the government, says that the country’s security and sovereignty is not under danger due to the recent events happening on the Russian-Georgian border.

Giga Bokeria made this statement on Wednesday on the TV channel Rustavi 2. He said that the situation cannot become an excuse for Russia to carry out another act of aggression.

He said Georgian services are mobilized to execute recent actions and Russia doesn’t have excuses to conduct any kinds of actions on Georgian territory.

But he adds that it doesn’t mean there are no dangers at all.

The secretary of the Security Council says that entrance of armed groups on Georgian territory may be related to the recent events in Dagestan.

“We cannot confirm anything right now and we do not plan to start proving anything. It is clear that these events are related to each other and the difficult situation in North Caucasus regions and for the latest days in Dagestan has clear relation to the recent fact which happened in Georgia.”

Bokeria responded to statement made by Russian officials who refuse that anyone crossed the border.

“Refuting such legitimate versions by such kinds of speeches is not serious, in my opinion.”

He said Georgia has informed the international community and Moscow, through Switzerland’s embassy in Georgia, about the planned operation.

“We took care that international partners had information, including EU observation mission. We used mechanism which is among us and Russia and through the help of Swiss colleagues we also informed the Russian Federation, to avoid any kinds of speculation for the lack of information, all sides were informed.”

Photos from the village Lapankuri (IPN).