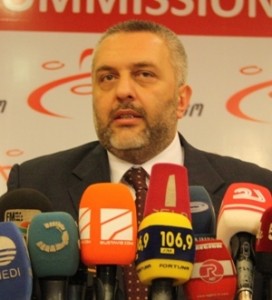 TBILISI, DFWatch – There is uncertainty about the exact date of Georgia’s parliamentary election, with some expecting that president Mikheil Saakashvili might decide to hold them earlier than October.

The exact date is decided by the president and must be announced at least sixty days in advance. The constitution says different things; on the one hand that it should be held in October, but on the other, some time after parliament is dissolved, which means it could be held any time in between July and October.

Tuesday president Saakashvili once more confirmed that he plans to hold them in October and that nine months is enough for the country to prepare.

2012 could become the year when power in a South Caucasus country for the first time in history changes through democratic means. Georgia currently has two major political blocs that are running close in the polls, though it remains to be seen whether the challenger, businessman Bidzina Ivanishvili, will be allowed to stand in the parliamentary election.

Saakashvili was meeting Wednesday with Zurab Kharatishvili (pictured), head of the Central Election Commission (CEC). His staff have a tough job ahead of themselves to make sure that the contest is fair.

Kharatishvili once again said that that the elections, according to the constitution, will be held in October, and that his administration began preparing for the next election immediately after the last election, which was the local elections on May 30, 2010.

“A strategic plan is prepared; we have enough human and financial resources for the election administration to prepare well for the upcoming elections,” he said.

The CEC chair says that for the next five years, CEC is entering a period of elections, one after another, which is an important challenge.

He stated that the next election period should become a period of fundamental change, as a result of which elections will become the common event and will no longer cause social and political clashes.

In recent time, all elections in Georgia have been marked by irregularities. This time it could be different, according to Kharatishvili.

“We have built our strategy in this direction, which is directed to form the full reliability towards the election environment, process and results. Today all interested parties, including political parties, international organization, society or media, have expressed a desire to once and for all get off the agenda the topic of unreliable and unfair elections. The time has come when we should establish full trust in the election processes,” Kharatishvili added.