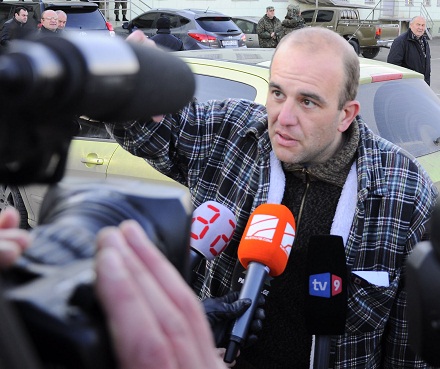 Convicted as NATO-spy? Vakhtang Maisaia, a former adviser at the Ministry of Defense, says his case file says he was spying not for Russia, but for NATO. (Interpressnews.)

TBILISI, DFWatch — 190 persons determined to be political prisoners were Sunday released from jail as a mass amnesty comes into force in Georgia.

Prison Minister Sozar Subari was present at Prison No 6, which is in Rustavi, a town 20 km south of the capital. He brought ten prisoners who were on the list of political prisoners out from jail.

The minister said 190 prisoners were released on Sunday. When the rest of the cases will be reviewed at courts, 3 000 other prisoners will also be free.

Among the freed prisoners in Rustavi were a well-known businessman Merab Ratishvili, who was accused of mutiny and spying.

Ratishvili said he has served five years and during this time he didn’t have the right to read and watch anything, but for the last month and a half he had a TV.

Family and relatives waited outside the prisons today to greet with those who were released.

Giorgi Demetradze, a former player on Georgia’s national soccer team, also left prison. The first thing he told journalists was that he still doesn’t know why he was sent to jail.

“I hope other prisoners will also leave jail. Here are many ill and illegal prisoners,” he said. “As for my detention, I still do not know why I was serving a jail sentence.”

He said he had been subject to psychological pressure, but no physical abuse.

The majority of the political prisoners served at Prison No 8 in Gldani in Tbilisi, where most of the prison abuse has taken place. 70 prisoners left that facility today and were greeted by Public Defender Ucha Nanuashvili, who said this is a historic day.

“The process of restoring justice continues,” he added. “People who were detained on political grounds are being set free.’

The ombudsman thinks the released prisoners need care, psychosocial, medical rehabilitation and assistance from the state.

Member of parliament for Georgian Dream, Eka Beselia, who co-wrote the law on amnesty, also greeted prisoners at Gldani, saying that cases of political prisoners will no longer be top secret. She thinks people should know who were accused of being spies and traitors.

One of the released prisoners demands that his case is made public, due to a very strange accusation, in his opinion.

“I wasn’t accused of being a Russian spy,” Vakhtang Maisaia said. “In my case, it is written that I was a spy for NATO’s special services. Let Mikheil Saakashvili answer for all of this to NATO’s Secretary General,” he said.

Interior Minister Irakli Gharibashvili promised to not let the crime situation worsen. He thinks enforcing the law on amnesty is a humanitarian act.

“Our ministry and police are fully mobilized and we won’t let the crime situation get worse.”