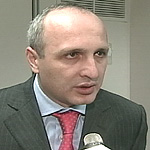 Prisoners will be able to make phone calls, receive family members, talk to their lawyer and have more time to shower and be in the open air, the minister promises.

The reason for the change is recommendations from the ombudsman, and local and international organizations, which have criticized the practice.

Authorities in Georgia are in the process of changing the law regulating it, but Human Rights Watch Wednesday called for immediate measures to milden the conditions of such prisoners, and not to wait for the new law.

The group pointed out that prisoners are being held for up to 90 days in cells that are built for only 72 hour stays. They lack proper access to shower and don’t get enough time in the open, among other things.

Under the new rules which came into force January 1, administrative detainees will have increased food rations, more time to shower, walk in open air conditions, receive family members twice a month, have one 10 minute phone call every week, and unlimited time with their lawyer, according to Merabishvili.

The goal is to protect the dignity and inviolability of the person and respect his or her private life.

Another reason for concern is interference in prisoners’ correspondence. The decree says that now administrative prisoners will be allowed to send an unlimited number of letters which will only be subject to ‘visual’ checks, where there is only a superficial control and the texts of the letters are not read. If there are indications that the letter contains anything dangerous, it will be opened in the presence of the detainee.

Letters to the Georgian president, speaker of parliament, members of parliament, courts, the European Court of Human Rights and international organization are exempt from checking, according to Merabishvili’s decree.

The decree also says that detainees who are in for 30 days or more will not have to have their head shaved, unless it is necessary for hygienic reasons.

Merabishvili’s decree does not address a number of issues. Although giving the detainee the right to receive a lawyer, it says nothing about the right to contact him or her. Human Rights Watch in their new report points out that lawyers are often not able to physically locate their client, because the detainee is not allowed to inform the outside world of what has happened to him. This is because administrative detention is regulated by a separate law, which has weaker protection of rights.

The organizations also points out serious weaknesses in the court trials of administrative detainees. Trials generally last only a quarter of an hour and are a mere formality where the case rests on police testimony.

When detainees try to get their version of the story heard, it is often ignored. In one case the group researched, a defendant had visible physical injuries on his body while in the courtroom, but the judge did not ask about his injuries.

According to the Interior Ministry, 31 persons were sentenced to 90 days detention for administrative violations, 132 persons to 60 days and 343 persons to 30 days in 2011.

The Georgian Young Lawyer’s Association estimates the total number of cases at around four thousand per year.