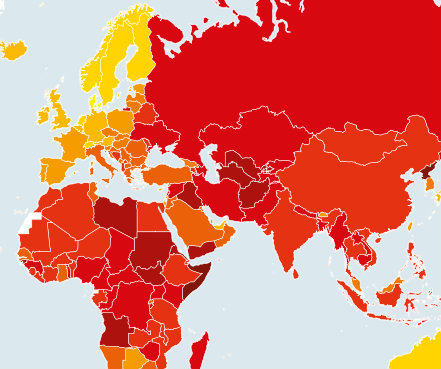 The Corruption Perception Index is published annually by Transparency International.

Georgia got 52 points out of the maximum 100. In the past, it scored 52 in 2012 (51st place) and 49 in 2013 (55th place).  TI notes that only a decrease or an increase by 4 points or more indicates any significant change in the perceived level of corruption in a given country, thus current results show that there was no significant improvement or backslide since 2012.

However, according to TI Georgia, in recent years Georgia has taken a number of positive anti-corruption steps, such as greater transparency of political party and electoral campaign financing, introduction of legal requirements and standards for proactive publication of information, effective operation of the State Audit Office, establishment of a transparent system of electronic public procurement.

Georgia ranks 2nd after Turkey among 18 Eastern Europe and Central Asia countries, and scored higher than a number of EU member states, such as the Czech Republic, Slovakia, Bulgaria, Greece, Italy and Romania.