Georgia may replace ambassador to Ukraine

Georgia may replace ambassador to Ukraine 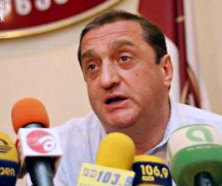 “The fact is that we faced certain problems regarding Ukraine,” majority leader Davit Saganelidze says. (Interpressnews.)

TBILISI, DFWatch–Georgia may replace its ambassador to Ukraine after a Saakashvili era official was appointed as Ukrainian health minister.

Wednesday there were reports that the government plans to replace its ambassador to Ukraine with Zviad Jankarashvili, who is executive secretary of Georgian Dream. Officials have not confirmed this yet, but don’t reject the possibility of replacing the ambassador.

Leader of the parliamentary majority Davit Saganelidze told journalists that there needs to be a review of staffing at Georgian embassies in several countries, including Ukraine.

“The fact is that we faced certain problems regarding Ukraine,” he said, meaning the recent appointment of Alexandre Kvitashvili as a health minister of that country.

“However, it is necessary to analyze how this was dependent on the embassy.”

He didn’t confirm that Jankarashvili has been appointed, but said the preferred candidate should be the one with more diplomatic experience.

Saganelidze thinks the Foreign Ministry made mistakes as it didn’t ‘correctly report’ information in many countries so that embassies could properly work with the governments there. Tedo Japaridze, who chairs the foreign affairs committee in parliament, agreed with this and said the ministry has to be more active.

Japaridze said the appointment of Kvitashvili as a Ukrainian minister creates some difficulties, but who to appoint as minister it is the sovereign right of Ukraine and a matter of domestic policy, he added.

He said the current Georgian Ambassador to Ukraine Mikheil Ukleba is very good and professional but cannot do much alone. Government officials must visit Ukraine more often and this would make it easier for the ambassador to do his work.

Foreign Minister Tamar Beruchashvili told journalists in Brussels that Ukleba continues to work and Jankarashvili will not replace him. Now the ministry and the embassy are preparing for Prime Minister Garibashvili’s visit to Ukraine slated for the beginning of 2015.