Georgia qualifies for EuroBasket with 71-59 win against Portugal

Georgia qualifies for EuroBasket with 71-59 win against Portugal 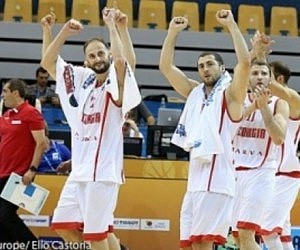 Georgia’s basketball team is qualified for the European championship next year, after winning against Portugal.

TBILISI, DFWatch–Georgia’s basketball team won 71-59 against Portugal on Wednesday and is qualified for FIBA 2015.

The Georgian team is now on top of Group E with four wins and two losses, followed by Czech Republic, Hungary and Portugal.

Georgia’s qualification to some degree depended on Wednesday’s match between Hungary and Czech Republic, which ended with Hungary defeating Czech Republic 83-68.

This is the third time Georgia’s national team has qualified for FIBA Euro Basket. FIBA should have been held in Ukraine in 2015, but due to the crisis, Ukraine refused to host it.

Croatia, Finland, France, Germany, Israel, Latvia, Poland and Turkey have all offered to be host of the championship, but the location is still not decided.