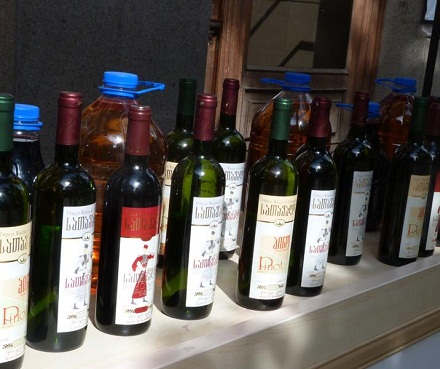 Georgian along with Moldovan wine was banned in Russia in 2006, but is expected back on Russian dinner tables in the near future. (DFWatch photo.)

TBILISI, DFWatch — Twenty Georgian companies are preparing to export their product to Russia.

A conference was organized at Tbilisi Marriott Hotel bringing together representatives of those companies and discuss the issue of Georgia exporting to the Russian market.

At Monday’s conference, guests discussed the procedures left to sort out before the products can be exported, as well as the results seen so far from the preparation work already done.

Giorgi Seturidze, Chair of Russia-Georgia Economic Cooperation Center, said at the meeting that the technical procedures are almost finished and interstate an agreement is needed to finish the process and export products to the Russian market.

“We have been working for two years to get Georgian wine and mineral water back to the Russian market,” he said, adding that too much work has been done in these years.

“We have approached a new level, where state structures need to get involved – it takes political will and an interstate agreement.”

He says the Russian market will profit from getting Georgian brands back, as they are historically famous there and it is not necessary to spend much money on advertising as it is in other countries.

In 2006, Russia introduced an embargo on wine from Georgia and Moldova, officially because of a finding by the consumer protection agency CPS (Rospotrebnadzor), according to the wine did not live up to health safety standards.

Before the embargo was enforced in 2006, about 75 percent of Georgia’s wine export went to Russia. According to official statistics, Georgia exported wine worth USD 80 million in 2005; in 2007, wine export figure was reduced to USD 29 million – 2.4 percent of all the export.

But the wine export has increased over the years, and in 2001 amounted to USD 54 million (2.5 percent of total export), according to the Georgian Statistics Department, Geo Stat. Currently, the number one importer of Georgian wine is Ukraine, which brings in wine worth USD 22.5 million per year.