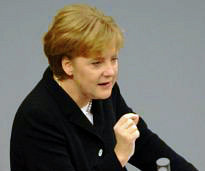 TBILISI, DFWatch–The Georgian government has begun preparing for a visit by German Chancellor Angela Merkel, even though the exact date of her visit is still unknown.

Foreign Minister Maia Panjikidze on Sunday met with the German ambassador to discuss the visit.

Georgian Ambassador to Germany Lado Chanturia said on Sunday that it is very important for political life in Georgia that Merkel comes on a visit.

He said Prime Minister Irakli Gharibashvili had a productive visit to Germany earlier, and that’s when when he invited the chancellor to Georgia.

“This must be well prepared,” he said, adding that there is also planned a visit by the Georgian foreign minister to Germany soon.

Tbilisi had frequent visits by Western politicians in the last few months before it signed an association agreement with the EU on June 27.