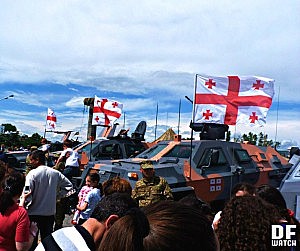 TBILISI, DFWatch–Georgia is preparing to celebrate Independence Day, May 26. Roses Square, where there usually are held exhibitions and organized different activities on this day, will be closed off to traffic this year from May 22 until May 26.

President Mikheil Saakashvili and his government were proudly conducting a military parade every May 26. The new government ended this tradition and for the third time, no military parade will be held on Independence Day, though a traditional oath taking ceremony will again be on the agenda.

Head of the government’s administration Maia Tskitishvili said a few days ago when the agenda was finally approved that there will be lots of ‘surprises’ on this day, which as usual will be ‘a people’s celebration.’

The main events are planned from 12:00 and will include a theater performance. At 13:00 there will be an oath taking ceremony on Freedom Square with elements of an air show with military aircrafts flying over Rustaveli Avenue.

This street will be blocked off the whole day and filled with a market selling traditional Georgia products, small concerts, games and an ice rink for skiing. Military equipment and machinery, some of it locally produced, will be on a display.

The day ends with a gala concert with fireworks in front of the parliament building. There will also be events in other cities and larger towns.

Addressing the issue of having a military parade, recently appointed Defense Minister Tina Khidasheli said that there is no problem to have a parade, but that it doesn’t have to be done on May 26.

She and Zviad Dzidziguri, a member of parliament from the parliamentary majority, agree that May 26 is a people’s celebration.

“There was no parade last year and the year before and neither will there be held one in the future. We are not conducting parades, we are not flexing our muscles to anyone. This is a people’s celebration, not a military demonstration,” he added.

The National Movement sees the government’s decision as an attempt to ‘weaken the Georgian army.’

Goka Gabashvili, a member of the party, said a few days ago that it has become a pretty harmful and unnecessary tradition.

“This is characteristics of the government which hates its own state institutes, particularly the Georgian army.”