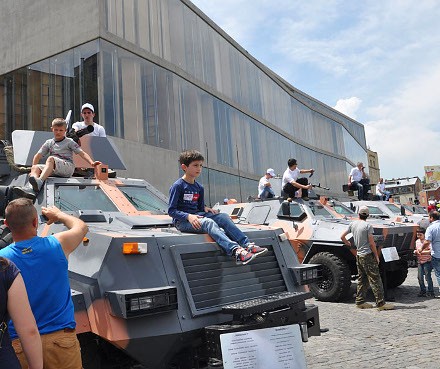 Exhibition of military equipment on May, 2015 (DFWatch)

Tbilisi, DFWatch – Georgia will mark Independence Day on May 26 in most of the cities and towns all over the country by organizing different events.

There will be no military parade. Instead exhibitions of military equipment are planned in Tbilisi center and recruits will swear an oath in Tbilisi, Batumi and Kutaisi, as well as in several other places across the country.

Georgia has not conducted military parades since changing of power in 2012. The last parade was held in Kutaisi in 2012.

Military equipment involved in joint Georgian-American-British military exercise Noble Partner 2016, which started on May 11 and ends on May 25, will also be on a display.

Government bodies, as well as private companies, as usual, will organize exhibitions, games, market and other events on Rustaveli Avenue and other destination in Tbilisi and other cities and towns. Corners will be organized for sport activities, entertainment for kids, scientific and information spots.

At the end of the day, a concert will be held in front of the parliament building with the fireworks.

During Soviet rule May 9, the day commemorating victory of the Soviet Union over Nazi Germany and its allies in the WW2, was a stage of major celebrations and a Red-Square-style military parades in Tbilisi center.

However, it has lost its luster after collapsing of the USSR and since then the focus has switched towards May 26, commemorating proclamation of Georgia’s independence from Tsarist Russia in 1918 by the newly formed government in Tbilisi led by Social Democratic party, i.e. Mensheviks.

In February 1921 Georgia was invaded by Bolshevik Red Army units.

Georgia declared independence from the USSR on April 9, 1991, however Independence Day is still marked on May 26.