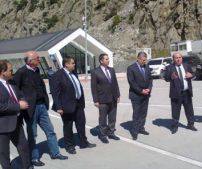 TBILISI, DFWatch–The customs checkpoint at Kazbegi, on the border between Russia and Georgia, was opened on Tuesday after a year of construction work.

“Georgia is a transit country not only for east-west, but it is a corridor between north and south,” he said.

“Unfortunately, nowadays this is the only one but really important point in order for Georgia to fulfill this function through transport transit.”

The finance minister noted that due to a high number of travelers and goods from Russia, there are crowds at the Russian customs. Economy Minister Giorgi Kvirikashvili said that Kazbegi will serve to increased the flow coming from Russia as well. He said the new checkpoint is equipped with modern systems and also has special passage way for disabled.

According to the Finance Ministry, the number of travellers before the reconstruction of the checkpoint was no more than 5 000 a day. Now the number has increased to 13 000. There is a recreation zone, rest place, conferences area and parking lot is in the process of being constructed.