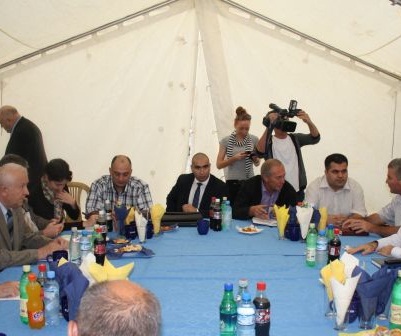 TBILISI, DFWatch – Georgia June 29 moved a police checkpoint a few hundred meters into Russian-controlled territory in the South Ossetian breakaway region. The EU has been mediating talks on the ensuing controversy.

Georgia’s reason for moving this checkpoint was to provide security for people living there so refugees could return, but Ossetians consider this groundless. They say the Georgian refugees didn’t return and now the village is empty, after the Ossetians left.

Media from so-called South Ossetia reports that the population is dissatisfied, and that’s why they have left the village. There are also speculations that Georgia is preparing a provocation in connection with the parliamentary election in October.

Representative of the de facto regime in South Ossetia said after a meeting of the EU-mediated talks that the talks had no results, because their demand to return the checkpoint to the previous location was rejected by the Georgian side.

“They raised the issue of dialogue and promised security guarantees for Ossetian living in this village. We have heard such kind of promise a number of times,” Khokh Gagloyev says, adding that Georgian police in Zaadiantkari are not harassing the local population, but locals say they don’t want to live in a place where there is a Georgian police checkpoint.

Gagloyev says after Georgia moved the police checkpoint forward to Zaardiantkari, the Georgian population has not returned to live there.

“But Georgia claimed that changing the place of the checkpoint was meant to provide security guarantees for people who want to return to their homes. But did anyone return?”