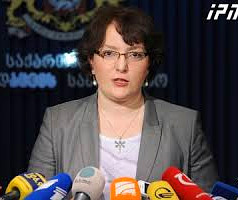 “This is my decision as minister of defense,” she told Channel 1 on Tuesday.

“If another leader comes to this office, naturally, that decision may be changed.”

The minister thinks a system with voluntary military service is much more effective.

She recalled her first hearing at the defense and security committee in parliament, where she said that she would abolish the conscription system and the ministry has already made such a decision, but it now needs legislative support.

“This doesn’t mean that it ends the process. Our goal is to introduce a system of voluntary service from 2017,” she said, adding that the same type of system is used in different NATO member states and it brings ‘better results.’

Switching to a professional army system was one of the promises made by the Georgian Dream government. Irakli Alasania, who was defense minister until his dismissal in late 2014, talked about the importance of ending compulsory military service. When she took over the same position, Tina Khidasheli declared her support for this idea.