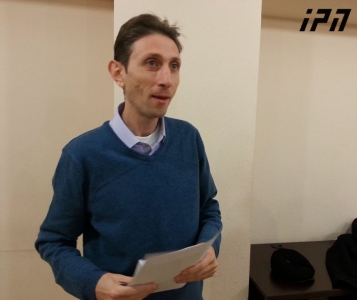 TBILISI, DFWatch–A controversy is brewing in Georgia over whether it should be written into the Constitution that a marriage is union between a man and a woman.

The idea has been around at least since former Prime Minister Irakli Garibashvili suggested it in March almost two years ago.

Last November, conservatives drafted a bill which currently has support among some members of parliament, but not yet the 76 votes required for a constitutional amendment to be considered.

Meanwhile, a lawsuit was filed with the Constitutional Court, demanding to remove a passage in the Civic Code which defines marriage as ‘a union of a man and a woman.’

Zviad Tomaradze, head of the conservative organization Georgia’s Demographic Society XXI, prepared the draft bill to amend the Constitution in November, 2015. This would see Georgia following the examples of Latvia and Croatia. Constitutional amendments require the votes of 76 MPs to be considered, and the bill has not yet gathered that many votes.

Zviad Tomaradze claims there are consultations with supporters of the bill within the Georgian Dream coalition and the Free Democrats, a former coalition member which is now in opposition, but that those supporters are avoiding openly supporting the proposal.

The bill will amend the first part of the 36th article of the Constitution, so the subjects in a marriage are defined as: ‘A marriage is a voluntary union of a man and woman with a goal to create a family.’

Today this article reads that a marriage is based on equality of rights and the free will of the spouses, but it doesn’t specify who can enter into marriage.

Tomaradze explains that the bill has been prepared foreseeing the experiences of Croatia and Latvia. He hopes that parliament will register it sooner or later.

“To my knowledge, the lawsuit by this transgender person, which was registered in the Constitutional Court, may accelerate this issue. By amending the Constitution, we will prevent the LGBT community from demanding same-sex marriage and it will be against any of their activities,” he remarked.

The lawsuit was filed with the Constitutional Court on January 27 by Giorgi Tatishvili, an activist for protecting the rights of sexual minorities. Earlier, he claimed to be a transgender woman named Matsatso.

The plaintiff’s demands is to remove article 1106 of the Civil Code, which defines marriage as a union of a man and a woman, as it is against article 36 of the Constitution about marriage.

It is still unknown whether the court will allow the lawsuit, but Tatishvili claims the court will decide this within two weeks and make a final decision in the case within nine months.

“There are two dimensions to the lawsuit. First, it is about abolishing article 1106, and then to consider this article in a peaceful environment and make a final decision. Through this lawsuit we are in fact raising the issue of same-sex marriage,” Tatishvili says.

He doubts that parliament will adopt the proposed constitutional amendment.

“There are lots of LGBT people among MPs and if they make such a decision only because of the rating I will begin to disclose their names.”