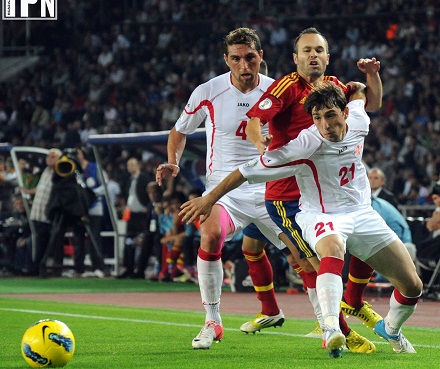 Spain scored one goal in the 87. minute. Football fans can not remember such a large crowd in a Tbilisi stadium before. (IPN.)

The Jvarosnebi team managed to keep the score at 0-0 until the very last minutes of the match. Roberto Soldado of Spain brought his team one point in teh 86. minute.

The Georgian team preferred to play defensive tactics, while Spain attacked and broke their defense nearly before the end of the match.

Georgia’s goal keeper Giorgi Loria received massive support from the Georgian supporters as he managed to prevent goals repeatedly, but in the second round he faced an accident as Zurab Khizanshvili hit him during one of Spain attack. He injured his knee and couldn’t continue playing. Roin Kvaskvadze replaced him.

After the match he told the official website of Dinamo Tbilisi that he didn’t have the slightest chance to stay on the field, which is a pity because the Georgian crowd was giving him real support. He hopes everything is still ahead of them and that they will be able to make Georgian fans happy.

The match was held in Tbilisi. The stadium was full of people. Georgian fans say they cannot remember so many people on stadiums of Georgia for the last decades.

“It was very exiting after Spain’s goal there was seconds of silence and then loud wow of fans yelling ‘Georgia’,” one of the fans said after the match.

Temur Ketsbaya, coach of Jvarotsnebi said after a press conference held after the match that the team needed a bit of luck to take points in a match against Spain, but he says he is satisfied with the game.

“It was more likely a commitment from our side rather then a game, but it is not a thing to condemn while playing against a best team of all time.”

He said the team is still far away from the level which Georgian fans expect of them.

“I want to congratulate Georgia for their extraordinary performance. They put us in a lot of difficulty with their enthusiasm and their ability to defend all our attacks through both the center and the wings,” Spain team manager Del Bosque told the Spanish Football Federation website.

At a press conference after the match he said the Georgian team played a completely different match from that they played against Belarus, but Spain was ready for every kind of situation and these changes provided a goal.

Zurab Khizanishvili from the Georgian team gives a more or less positive assessment of the match.

“It is hard to play 90 minutes in defense and on a background of such pressure.”

Davit Targamadze said it’s a pity you do everything and you let in a goal in the 87. minute.

“Going to the airport! Difficult win against Georgia! Very important to start winning! Impressive effort from the Georgians!” Gerard Piqué wrote on his official Facebook page after match.

“We started off well with three points; it has been complicated,” Andres Iniesta wrote also on a Facebook page.

September 7 Georgian team started qualification matches for 2014 FIFA World Cup with a victory against Belarus with a score 1-0. Next match is against Finland. Currently Georgia has three points, after playing two matches and winning one.