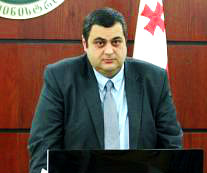 TBILISI, DFWatch–The government in Georgia is subsidizing the grape harvest with 25 million lari (USD 15 million) in the form of cheap loans to wine companies. This is a threefold rise, compared to previous years.

Explaining the increased stimulation of the wine sector in the crucial harvest season, Minister of Agriculture Shalva Pipia said agriculture remains a priority for the government.

The ‘rtveli’ will start in the end of August in Dedoplistskharo, a town in Georgia’s eastern Kakheti region.

Wine producing companies will be able to get preferential loans for 15 months with 12-15 percent interest rate, out of which 9 percent will be covered by the government.

“In case of purchasing grapes for more than one lari (USD 0.60), the government will directly assist and provide financing for wine-producing companies to cover part of the costs,” said Levan Davitashvili, head of the National Wine Agency, at a joint press conference.

The agriculture minister explained that subsidies will apply for three grape species known as Rkatsiteli, Kakhuri Mtsvane and Saperavi.

Georgia today has more than 60 wine factories that differ in size and technology, with many smaller farmers hoping to someday start exporting.

“There won’t be differences for grapes harvested from small or large lands, but there will be equal conditions for large and small entrepreneurs and farmers,” Pipia assured.

An overall figure for 2012 is not stated in the budget, but the government handed out vouchers. For one kilo Saperavi there was 35 tetri (21 US cents) of subsidies, and 25 tetri (15 US cents) for Rkatsiteli.

The wine sector may hold the greatest promise for Georgia’s economy in the near future, in light of Russia recently lifting a ban on import.

Already, the impact is felt. Over 1.7 million bottles so far exported the northern neighbor. Pipia said the latest data shows that wine export has increased by 43 percent compared to July last year.

“We think the 2013 grape season will be successful and the harvest will be really good,” he added.