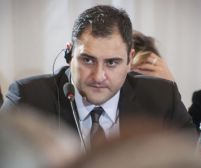 TBILISI, DFWatch–The government in Georgia wants to increase the punishment for engaging in illegal surveillance to seven years in jail.

Presenting the draft bill on Thursday, Interior Minister Alexandre Chikaidze said that in past years, human rights were violated and private lives were recorded. This kind of crime may be punished with three years in jail under current law.

Chikaidze explained that with the new bill, if a person obtains video, photo or audio footage of private life and presents it to law enforcement bodies he won’t be punished.

“But if he uses it for different purposes, no matter who he is – civilian or representative of law enforcements, they will be punished,” he added.

The bill with amendments to the Criminal Code will be introduced in parliament next week.