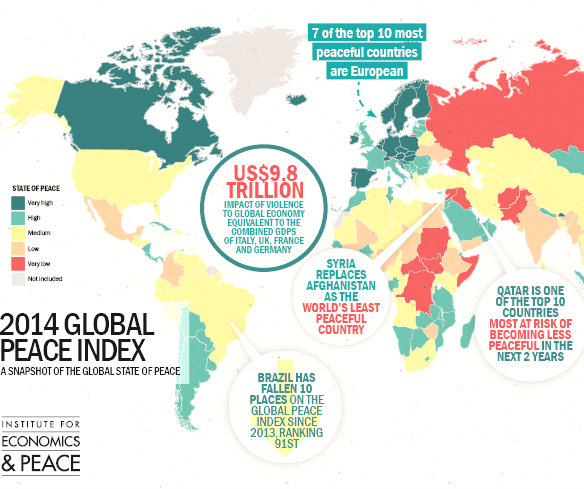 TBILISI, DFWatch–Georgia has improved its standing on the latest Global Peace Index by 28 places and is now 111 among 162 countries.

The index, which was published Thursday by the Institute for Economics and Peace, gave Georgia 2.22 points.

It says Georgia had the most significant increase in peace in the 2014 index, and improvement of political stability after conflicts over the past years.

“This still puts it below the global average, but represents an important improvement for a country that in 2008 suffered from a conflict with Russia over the separatist regions of South Ossetia and Abkhazia.”

The report also says Georgia has improvements both in its external and internal peace scores. This was due to improving relations with neighbors including Russia. The country has not established diplomatic ties but ‘has seen some thawing of its existing animosity though a (limited) resumption of trade.’

“On the internal side, Georgia’s score was boosted by a fall in the jailed population, as well as in the number of refugees and displaced persons, while its post-war stability was reflected in a reduction of its level of organized conflict, as well as political instability in the government’s second year in office,” the report reads.

To a lesser extent, Georgia also benefited from a fall in military expenditure, it notes.

According to Global Peace Index, the most peaceful countries are Iceland, Denmark, Austria, New Zealand and Switzerland, while Syria and Afghanistan are at the bottom of the list.