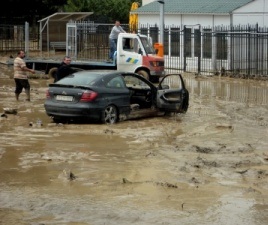 Cars nearly ended up under water and basements were flooded several places in Georgia Tuesday, because of unusually heavy rain. (IPN.)

In Kutaisi, the second largest city, first floors and basements are under water.

In Batumi, a defective drainage channel let to rivers of water in the roads.

Local media in the eastern Kakheti region reports that the main road connecting the region to Tbilisi is flooded, and movement was stopped for some time in the morning. First floors and basements are under water. The rivers Akhtala and Navtiskhevi have risen to dangerously high levels, and caused flooding of the road.

Kakheti Information Center reports that cars almost ended up under water in the town Gurjaani. The emergency service helped move them away from the danger area.

The roads that go up to several villages in that region, including Cahdari, Dzirkoki, Vejini, Kolagi as well as Gurjaani, are covered with water and people have to bypass the flooded stretches of the way. Some villages are without electricity.

The rain is continuing in the Kakheti region.