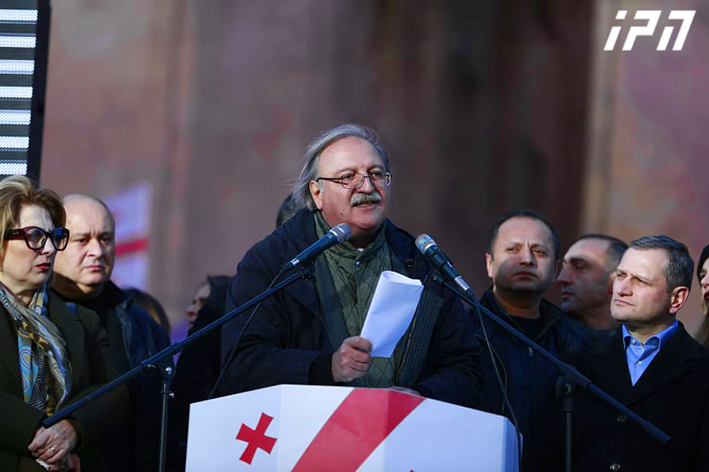 TBILISI, DFWatch–Several thousand people attended a rally in Tbilisi Sunday to support the United Opposition and its demand to dissolve parliament and hold snap parliamentary elections.

The opposition repeated its claim that the presidential election was falsified and therefore illegitimate, demanded snap elections and offered the government an ‘ultimatum’: Either negotiate in ‘a different legal and political environment’, or face a long campaign of street rallies.

The ultimatum expires on December 16, the day President-elect Salome Zurabishvili is to be inaugurated.

If the terms of the ultimatum are not met, the UNM-led United Opposition threatens ‘permanent protest’.

At Sunday’s rally, calls were heard to thwart Zurabishvili’s inaugurations, however, unlike earlier statements by ex-president Mikheil Saakashvili, the opposition leaders now refrained from resorting to revolutionary rhetoric.

“Neither will we transcend the Constitution nor break the law, nor will we get into fist fights. We have enough education, intelligence and experience that we can legally defeat you. The Georgian people will defeat you legally. Our anger will be expressed in continuous protest [rallies] until the voice of the Georgian people is heard,” Grigol Vashadze, the United Opposition presidential candidate said in his address.

The November 28 presidential runoff wasn’t an election, it was ‘a criminal-terrorist special operation against the Georgian people’, Vashadze said.

The elections were ‘stolen’ by the government, “Georgian Dream has no political mandate or trust to run the state,” Vashadze said. “Georgia has no president.”

The opposition also said it would start a legal battle to annul the result of the runoff election.

The result of the second round of the presidential election was catastrophic to opposition candidate Vashadze, who lost to Zurabishvili by almost 20 percentage points. It was even more surprising since in the first round they received almost the same number of votes, and after seeing the results of the first round, other candidates either expressed their support to Vashadze or called on their supporters to boycott the runoff.

The opposition claims the elections were seriously rigged by bribing or intimidating voters and through other illegal methods. These claims have been vehemently rejected by the government, which insists that it was the specter of a return to power of Saakashvili’s ‘bloody regime’ that brought tens of thousands of people out to vote who didn’t participate in the first round.