Georgia has highest proportion of undernourished in South Caucasus

Georgia has highest proportion of undernourished in South Caucasus 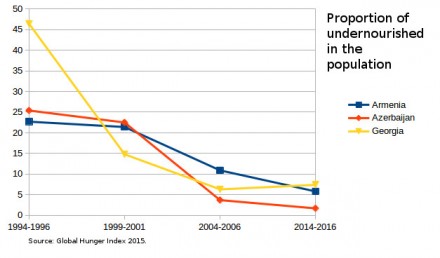 TBILISI, DFWatch–Georgia has the highest proportion of undernourished among South Caucasus countries, according to a new report.

Worryingly, Georgia is the only former Soviet country where there has been an increase in the level of undernourishment between the 2004-2006 study and the most recent one, a period during which the country has gone through economic reforms to make it more attractive to foreign investments.

Taking in other factors as well, the Global Hunger Index ranks Georgia 19th among 104 countries around the world, a position it shares with Bulgaria, ahead of China and after Trinidad & Tobago.

According to the 2015 index, the country with the lowest hunger level among countries measured is Kuwait, followed by Saudi Arabia and Turkey. The Central African Republic is last on the list, after Zambia and Chad.

“Armed conflict and hunger are strongly associated. The countries with the highest GHI scores tend to be those engaged in or recently emerged from war,” the authors of the report write.