Georgia gets a new Chair of the Joint Staff

Georgia gets a new Chair of the Joint Staff 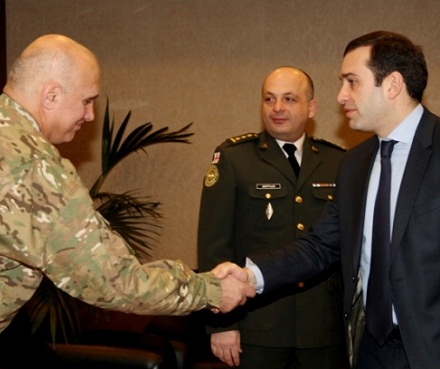 TBILISI, DFWatch — Georgia’s Defense Minister and President have agreed on a new candidate for Chair of the Joint Staff.

Irakli Alasania, Defense Minister on Tuesday presented Colonel Irakli Dzneladze who will be filling this post. A day before, consultations were held with President Mikheil Saakashvili.

According to the ministry’s press office, the defense minister has already given Colonel Dzneladze his first task; to to start preparations for a visit by the NATO Military Committee. The visit should have been held last month but was postponed till 2013 because of the charges brought against the former Chair of the Joint Staff, Goirgi Kalandadze.

Kalandadze was detained for charges of abuse of powers. He was released on bail before the trial, but at the request of the Prosecutor’s Office, the court suspended his authority. His deputy has fulfilled his duties in the meantime.

Colonel Irakli Dzneladze has been serving in Georgia’s Armed Forces for 20 years, the defense ministry informs. He more recently served as Defense Attaché to Ukraine. He has also worked in J-3 Operative Planning Department and Land Forces Command for various periods.

The minister today held a meeting with Dzneladze to discuss future plans. He will assume his new position after the president has signed a decree.