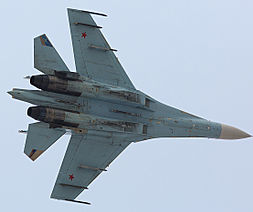 A few days ago, local media reported that five Russian SU-27s and one IL-76 crossed Georgia on January 10 and landed near the Armenian capital Yerevan.

Georgia’s Defense Ministry issued a short statement saying that it can not confirm the overflight.

Russian military jets have never flown over Georgia since the war in 2008, but there have been cases when Russian transport planes have violated Georgia’s airspace.

The reports carried in the media claim that the Russian planes were on their way to Bahrain through Yerevan in order to participate in an air show, and after the show will return to a military airfield close to Moscow, allegedly returning again through Georgian airspace on January 20.

Giorgi Inauri, who works with military issues, tells daily newspaper Rezonansi that any violation of Georgian airspace must be followed by a reaction from the government. He says, in this specific situation, these jets cannot bring any harm, but the overflight is an insult.

“It turns out that Russia doesn’t respect Georgia’s sovereignty even on the unoccupied 80 percent,” he says.

Giorgi Tavdgiridze, who also comments on military issues, thinks that these jets didn’t have any military goals and concerns about this case are groundless.

Russia used SU-27 jets during the 2008 war to control the airspace and deny the Georgian air force the use of its military jets. Su-27 were also used in 1992-1993 during military actions in Georgia’s breakaway region Abkhazia.

Russia has lost two such jets over Georgian territory: the first one crashed close to Sukhumi in March 1993, while the other one went down in the sea the same summer.