Georgia counting damage of the storm

Georgia counting damage of the storm 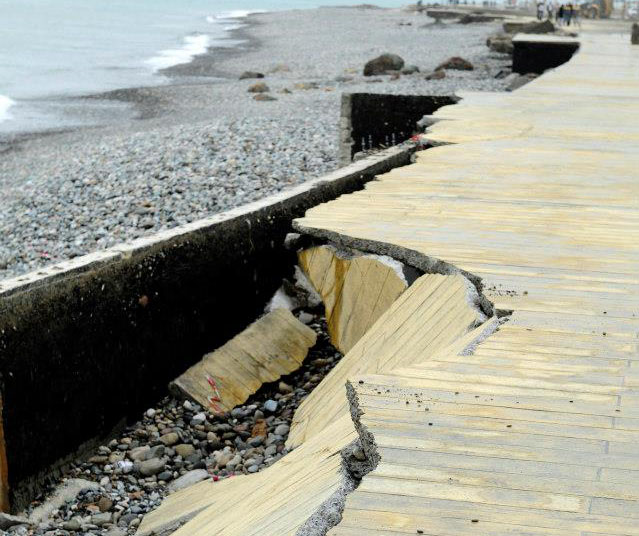 Tbilisi, DFWatch – The extent of damage after a storm March 23 continues to increase and has now reached about USD 4 million, according to the latest estimate.

Energy Minister Kakhi Kaladze on Thursday informed that the worst losses was damaged houses in the regions outside Tbilisi. He said money will be released from the reserve funds of Prime Minister for the restoration works will be.

Different regions, cities and towns were affected during the storm of March 23, which took the life of one person; a man, 55, who drowned after being taken by a large wave.

The boulevard next to the beach in the popular summer resort city Batumi was destroyed, as well as parts of other towns along the Black Sea shores.

Minister of Infrastructure and Regional Development Davit Narmania said that despite the damage and loss, the tourist season of summer is not in danger.

“Work to reinforce the beach will last during April and May,” he said on Thursday, adding that before the tourist season, most of the work will be finished, including cleaning up the beaches and restoring local infrastructure.

Red Cross in Georgia on Thursday distributed tarpaulin in Gori, a town close to the capital, for people to patch up their roofs. The association will also distribute blankets, mattresses, kitchen sets and hygiene parcels.

Meanwhile, the Finance Ministry’s Service Agency distributed wood to Mtskheta Municipality to fix the roofs that were damaged there.

According to Dimitry Khundadze, Majoritarian MP for Mtskheta, 1000 square meters of roofs are damaged in Mtskheta, and work to repair the roofs is in progress.

Military personnel are engaged in the damage assessment and repair work all over Georgia.