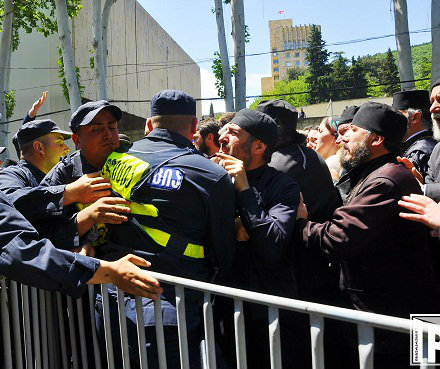 A scene from May 17. (Interpressnews.)

TBILISI, DFWatch–The Interior Ministry in Georgia says it is charging two high-ranking clerics who work for the country’s Orthodox church.

(Article has been corrected.) The police is pressing charges against the archimandrite of Sameba cathedral, Father Anthimoz (Tamaz) Bichinashvili, and a monk from “Ioane and Tornike Eristavi convent”, Father Iotam (Irakli) Basilaia, in connection with the disruption of a demonstration by LGBT people on 17 May.

An investigation was launched under article 161, part one, of the criminal code, which is about encroachment upon the right to assembly and demonstration.

The ministry further writes in a statement that the investigation continues into incidents that took place on May 17.

(A previous version of this article incorrectly said that the two clerics had been arrested.)