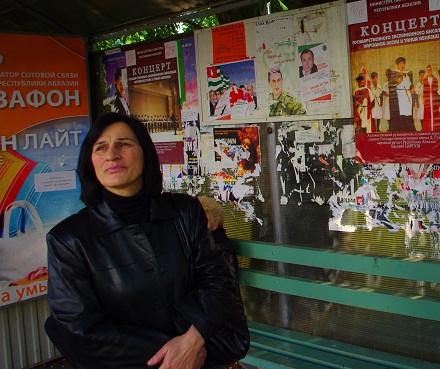 A woman waiting for the bus in Sukhumi. Georgia asks Russia to close its embassies in the breakaway regions before diplomatic relations can be reestablished with Russia. Relations were broken off after the war in August 2008.

TBILISI, DFWatch – The Georgian president says diplomatic relations with Russia will only be restored if Russia closes its illegal embassies in Georgia’s two breakaway regions Abkhazia and South Ossetia.

Mikheil Saakashvili’s statement comes as a response to what Russian president Dimitry Medevedev said Wednesday; that he wants to restore diplomatic relations with Georgia, but only if he won’t have to shake hands with ‘one person’, understood to mean Mr Saakashvili.

Russian officials a number of times have said that the Georgian president is unacceptable and they refuse to talk to him.

Diplomatic relations with Russia and Georgia suspended after the war in 2008, when Russia occupied Georgian territories.

“We are absolutely ready to restore diplomatic relations with Georgia. We hadn’t stopped it. There is only one person I don’t want to have business with. Probably you know, who I am talking about, I won’t meet him and shake his hand,’ Medvedev said.

“It’s unclear what they mean by Georgia. Is this Georgia for them in the internationally recognized borders or is this Georgia without the territories occupied by them?” Saakashvili’s press spokesperson Manana Manjgaladze said at a press conference Thursday.

She notes that to sever diplomatic relations with Russia is not a whim, and this step was only taken because Russia invaded Georgia and until today has occupied 20% of its territories, Abkhazia and South Ossetia.

Manjgaladze said the problem is not about persons, not Mikheil Saakashvili, but has to do with the Georgian population, five million citizens and especially the thousands people who, because of Russia, are in exile.

The press spokesperson said that diplomatic relations with Russia will only be restored when Russia closes its so-called embassies in the capitals of the breakaway regions, Sokhumi and Tskhinvali. They were illegally established, she added.