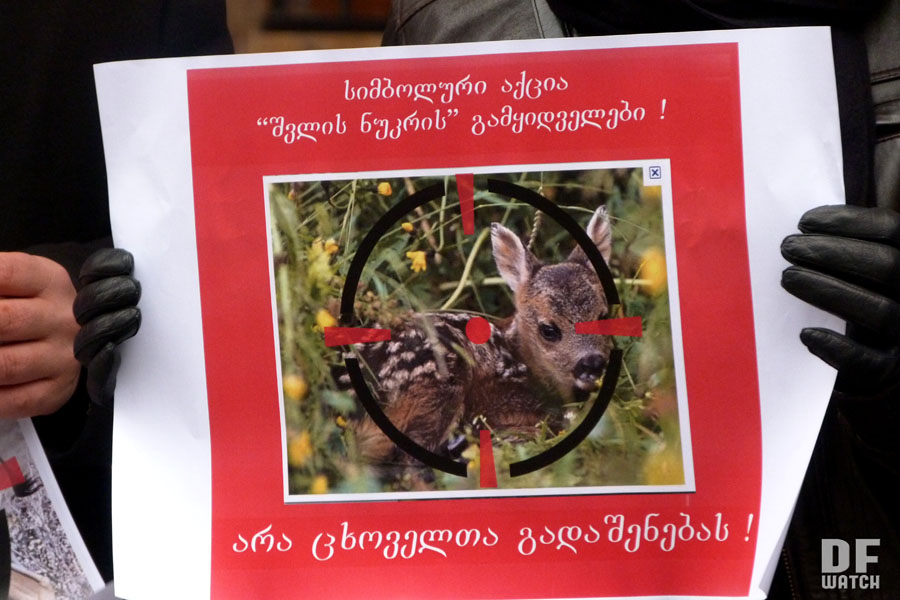 One year ago authorities carved up the Environment Ministry. Now a set of changes will allow the hunting of animals listed on the Red List of endangered species. (Photo: Mari Nikuradze.)

The legislative changes will also allow hunting in protected areas.

Hunting and protection of species is regulated by a kind of laws used under the Soviet Union called normative acts and decrees. The law doesn’t directly says one can kill an animal which is on the Red List, but new normative acts now say that authorities may decide what number of animals can be allowed to be killed.

“The decision about allowed amount of harvesting endangered wild animals is made by the Environment Minister based on an individual administrative-legal act,” the law says.

The Ministry of Energy and Natural Resources issued a decree which now allows obtaining animals of certain species, including animals that are on the Red List, a list compiled by the International Union for Conservation of Nature, showing the extinction risk of species.

Lasha Chkhartishvili, member of the Conservative Party and founder of Greenpeace Supporters Group says that it’s completely unclear why the Energy Ministry should issue such a normative act at all, it should be the competence of the environment ministry.

Georgia’s Ministry of Environment Protection was split up and nearly dissolved one year ago. Responsibility for natural resources was transferred to the Energy Ministry, while the task of overseeing protected areas was handed to the Ministry of Economic and Sustainable Development. The Environmental Protection Inspectorate was dissolved, and the only remaining responsibility for the Environment Ministry was to monitor air pollution. It was also physically moved and now shares offices with the Energy Ministry in Tbilisi’s Ortachala district.

The hunting season is getting closer and the adopted changes create serious danger to the animals if countermeasures are not taken soon. Greenpeace Supporters Group held a rally on Thursday in front of the parliament building to protest the changes in the legislation that they say will legalize hunting in protected territories and of animal species on the Red List. 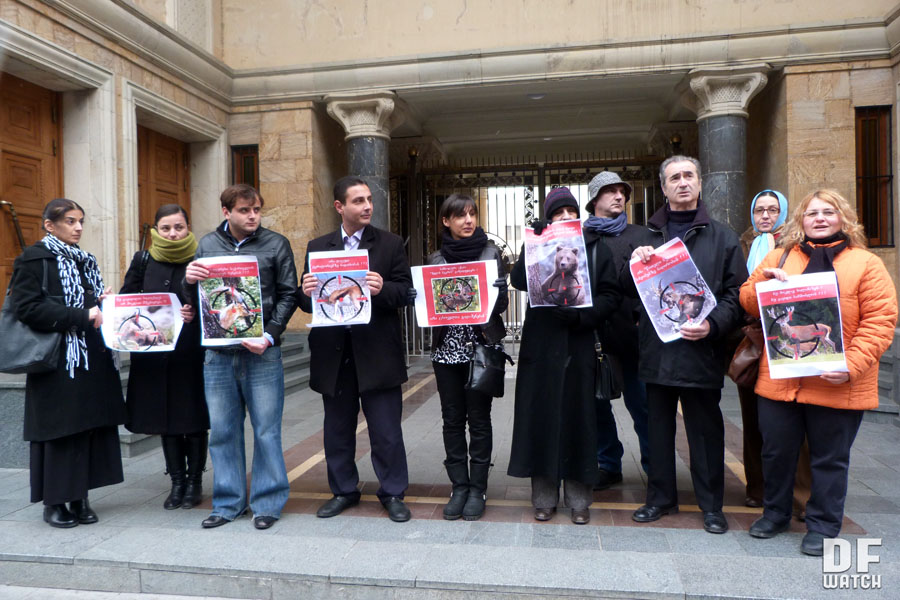 Greenpeace Supporters Group gathered at the entrance to the parliament building in Tbilisi Thursday to protest against the the hunting of endangered species. (Photo: Mari Nikuradze.)

Among the problems that drove participants to show up at the rally were the fact that this list issued by the ministry was prepared without conducting any research and studies to find out current population numbers and decide permissible levels of harvesting for each species and in each area.

The changes were made to the Forest Code in late December which now makes it legal to fish, hunt and install traps in the Tusheti protected landscape area; Ilto wildlife refuge; Lagodekhi Nature Reserve’s wildlife refuge and in Kobuleti state reserve wildlife refuge.

“This decision is especially worrying when the government doesn’t have any mechanisms prepared to control, monitor and fight poachers, animal care in the territories where hunting is allowed,” the organization Green Alternative writes in a statement.

“There is no data about the number and population situation of the species on the hunting list.”

Several international organizations expressed concern before adopting the changes. World Wildlife Fund (WWF) released a statement regarding the issue saying that allowing hunting in protected territories is unacceptable; it doesn’t comply with international practice and contradicts the guidelines of the International Union for Conservation of Nature (IUCN).

“The draft also vaguely refers to Red List species. We note that any kind of underplaying the importance of the Georgian Red List will have a negative effect on the Georgian ecosystem,” WWF’s statement says. Any changes and decisions made regarding the Red List should be preceded by a reasonable scientific evaluation, WWF adds. 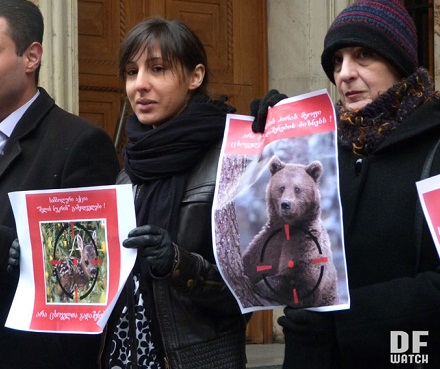 “I travel a lot in the Georgian regions and often I get information that officials frequently go hunting. By issuing such acts parliament gives them and tourists who come here with this aim more possibilities,” Tinatin Mosiashvili from Greenpeace Supporters Group says.

She says that Georgia is a hot spot for biodiversity, a habitat of which there exist only 25 spots on Earth and all these regions are facing dangers. Rare species need more care, she says.

The explanatory notes of the drafts say that the aim of the bill is to improve the rules and procedures for harvesting species.

Local and international organizations agree that the legislation really needs improvement, but without worsening the situation.

Green Alternative warns that as a result of such a decision, irreparable damage will be done to Georgia’s unique biodiversity. In the shortest time it is possible that a number of goats, deer, eastern and western Caucasus aurochs, and chamois and bear population fall to a critical level.

“The Georgian government made a decision about allowing hunting of endangered animal species on the Red List hastily and non-transparent, without participation of the interested society,” Green Alternative says.

The participants at Thursday’s rally say the protests will continue on a bigger scale if immediate steps are not taken.