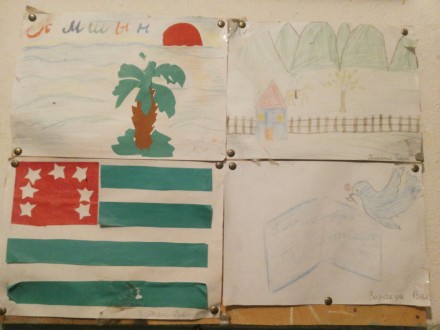 A child’s drawing on the wall inside a school in a village in Tqvarcheli region (Dominik K. Cagara)

Maia Kvarachelia from Gali-based NGO Avangard tells DF Watch about the gender-related issues the region has been facing since the end of the war in Abkhazia.

The conflict in Abkhazia has left its mark on the population of the breakaway region that still strives to come to terms with its solemn legacy. However, there are differences in how the conflict affected women and men in the region.

Maia Kvaratskhelia is a women’s rights activist in the Gali region and a founder of local NGO Avangard which is active in the regions of Gali, Tqvarcheli, and Ochamchire.

‘After the armed phase of the conflict ended, women would be seen in the streets more often than men’, she tells DF Watch. ‘Men were more likely to be victims of violence on behalf of Abkhazian militia if they left their houses, so it was the women who assumed the role of breadwinners. They would cross the Enguri river on regular basis, engage in trade, and bring sacks of goods back to Gali.’ 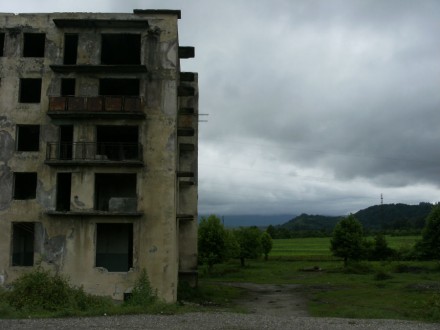 The new challenging situation affected women’s health. ‘The state didn’t have time or resources to pay attention to women’s issues. Villages lost their doctors during the war, leaving women without access to healthcare. Many women started to develop gynaecological problems.’

Women’s access to healthcare in Gali, almost entirely populated by ethnic Georgians, is still extremely limited. The region is plagued by high level of AIDS and hepatitis (mostly hepatitis C). In majority of cases women need to travel to Tbilisi in order to receive professional healthcare, which can be problematic due to the political circumstances.

Women’s reproductive rights are also falling short. ‘As the awareness and availability of contraception was limited, women couldn’t decide on the amount of children they would bear. Sex-selective abortions are still a means of contraception in the region’, Maia says. 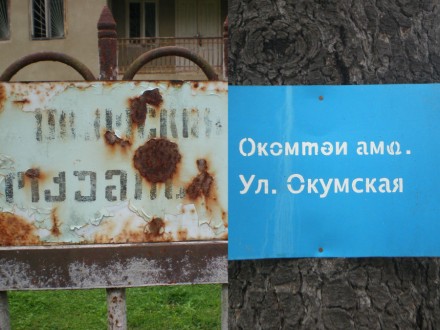 old (in Russian and Georgian) and new (in Abkhaz and Russian) street name sign in Gali (Dominik K. Cagara)

‘No research has been done on how Gali women were treated during the conflict. There is an anecdotal evidence of rapes, but no study has been conducted. The issue is difficult to handle due to the lack of a reconciliation process. Films about the conflict also show only the male experience.’

Cultural factors have also affected women’s situation in the region.

‘As getting married is a way of raising a woman’s status in the community, families prefer that girls get married instead of going to university. Some girls get married as early as at the age of 14 and bride-kidnapping is not unheard of. Once a girl gets married, she stops attending school. She doesn’t get to go to graduation exams in June. If a girl doesn’t graduate, her access to legal documents such as passport becomes limited. Without legal documents, women can’t register their marriage, and without registration — they can’t claim property.’

Women are underrepresented in the region’s politics and, with the exception of the head of Tqvarcheli administration, all top positions belong to men.

Myths are used in order to justify the discrimination. ‘Queen Tamar is an example of a figure often used by men to perpetuate the idea that women have always been empowered in the Georgian society’, Maia explains. ‘A son is considered necessary to continue a man’s family. Women don’t have enough value to be considered future generation. In reality, a woman is always the property of a man.’

The discussion about the gender issues in the Gali region has been impeded by insufficient or inadequate research. NGO Avangard tries to address the issues through conducting workshops, film sessions, raising discussions, and raising awareness on gender-based violence. UNHCR supports the organisation’s project called Prevention and reduction of sexual and gender-based violence in Eastern Abkhazia. Another organisation active in the region is Swedish NGO Kvinna till Kvinna. Involving men in the process of achieving greater equality is now seen as a part of the solution.

Although the issues are mounting, NGO Avangard can be proud of some achievements that mobilise them to further work. ‘Our biggest achievement is that women apply to different services of our organisation more often than it was when we started our work against gender-based violence. This is has also been tracked in the appeals to the local law enforcement agencies. Women go there often and try to claim their rights. Men2Men work is an integral part of our activities and this is also our great achievement.’

The article discusses developments as seen from Abkhazia and doesn’t reflect the view of DF Watch. The word ‘Abkhaz’ refers to an ethnicity, while ‘Abkhazian’ refers to an inhabitant of Abkhazia regardless their ethnic background or an institution based in Abkhazia.