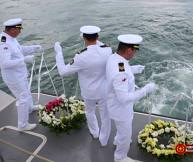 TBILISI, DFWatch–A funeral service was held Thursday for two Georgian military divers who disappeared during an exercise in the Black Sea more than two weeks ago.

The funeral service was held at the location where the soldiers were last seen during a training course on August 16 and was attended by the defense minister as well as family and friends of the missing divers.

Soldiers lowered the flowers to the sea from a small patrol boat. In keeping with military rules, salvos were also fired.

Defense Minister Levan Izoria expressed his condolences to the families of the deceased. He said the investigation is not yet over and the Prosecutor General’s Office may soon share more details.

Patriarch Ilia II, who also attended the ceremony, said he didn’t come to express his condolences because he hopes that the soldiers are alive. He met with the families of the victims to bless them and expressed hope that the soldiers soon will get back to them.

Prime Minister Giorgi Kvirikashvili promised to resume the search for the bodies, which was halted on Wednesday. He said on Thursday that Georgia has asked its partner states to renew the search effort.

“We will do the best our country can do. We again appealed to our partners for assistance,” he said.

Corporal Iago Sharadze (26) and Private Giorgi Nanetashvili (24), were attending a course in combat diving. They had both planned to pursue naval studies. During the exercise, they dived down but were unable to swim up to the surface.

Sharadze had served in the army since December 2010, while Nanetashvili from June 2013.

The defense minister on Wednesday temporarily halted marine exercises and said that there are indications that a crime has taken place in the case of the missing divers.