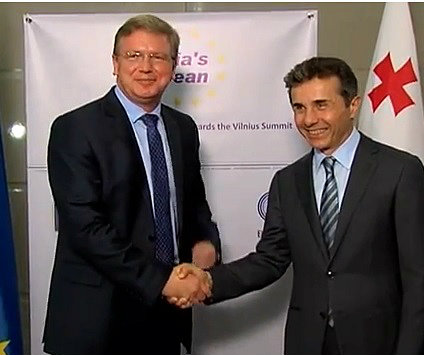 TBILISI, DFWatch–EU Commissioner Štefan Füle is hopeful about Georgia’s chances of signing an association agreement with the EU at the Eastern Partnership summit in Vilnius in November.

Füle is visiting Georgia and today met with Prime Minister Bidzina Ivanishvili after which they held a joint press conference.

During the conference, Füle and Alexi Petriashvili, Georgia’s Minister for Euro-Atlantic Integration, signed a financial agreement which will allocate 16 million euros for Georgia to develop and support governmental bodies responsible for border management and migration.

On Friday, the commissioner also met with Interior Minister Irakli Gharibashvili to discuss cooperation with the EU and the process of implementing an action plan before signing an agreement about visa free travel with the EU.