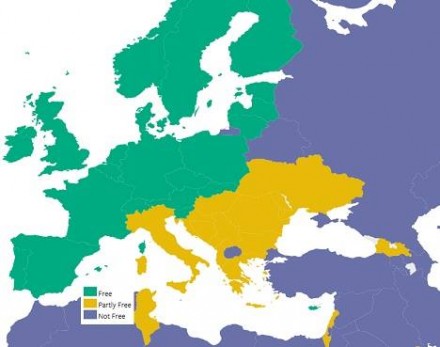 TBILISI, DFWatch–Georgia took the 96th place among the world’s 199 countries and regions evaluated in the latest edition of the Freedom of the Press  report prepared annually by Freedom House.

Georgia earned the highest score of 49 points (0 is best, 100 is worst) among the post-Soviet countries, with the exclusion of the Baltic States. Along with Ukraine and Moldova, Georgia’s press freedom was labelled ‘partly free’.

Although Georgia didn’t score higher than any current EU member, it came close to Greece, which earned 48 points.

Among Georgia’s neighbours, Armenia took the 139th place, Turkey took the 156th place, Russia took the 176th place, Azerbaijan took the 189th place. They were all labelled ‘not free’.

Earlier this year, Georgia earned 64 points (0 is worst, 100 is best) in Freedom House’s Freedom in the World report, which labelled Georgia ‘partly free’. Georgia scored higher than Turkey (53 points) and Armenia (46 points), which were equally ranked ‘partly free’. Russia with the score of 22 points and Azerbaijan with 16 points were labelled ‘not free’.