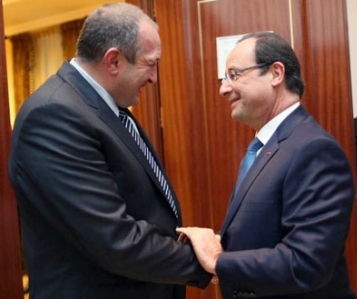 TBILISI, DFWatch–French President François Hollande arrives in Georgia on Tuesday as part of his tour of the South Caucasus.

Hollande’s trip takes place amid a crisis in Ukraine and is aimed at boosting the EU’s ties with the region, the French news agency AFP reports. He has already visited Azerbaijan and Armenia. The last stop on the tour, Georgia, will last one day.

Georgian President Giorgi Margvelashvili will host his French counterpart after a welcoming ceremony at the president’s palace. There they will have a bilateral meeting, and afterward hold a joint press conference to sum up the results of the meeting.

The French delegation will leave Georgia late on Tuesday.