Four years since the war between Russia and Georgia

Four years since the war between Russia and Georgia 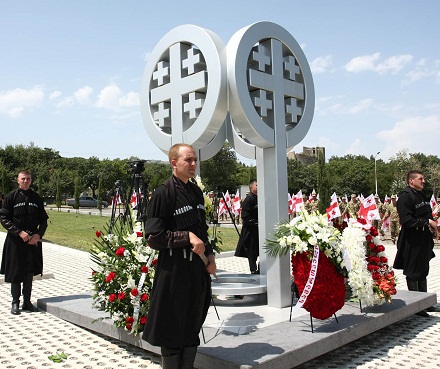 TBILISI, DFWatch – Four years after the war between Russia and Georgia, which led to hundreds of deaths, occupation of Georgian lands and Russia’s recognition of two separatist regions, flags are lowered on all government buildings.

Davit Bakradze, Speaker of Parliament attended a flag lowering ceremony together with MPs today. They commemorated the victims of the war. He visited the check point at Ergneti, which is near the city Tskhinvali, where the 2008 war took place.

The war started on August 7, 2008, between the Georgian army and Ossetian separatists reinforced by Russian soldiers. Russia entered the war on August 8. Georgia claimed that Russia had taken in its troops and armored vehicles before.

Georgia lost outposts located in separatist region populated by Georgians. Those were outposts which Georgia controlled after conflict in 90s – almost for two decades. Those were Kodori Valley in Abkhazia and Akhalgori region in Tskhinvali region.

After, international community first used term ‘occupation’ officially in regards of Russian actions. Hilary Clinton, USA Secretary of the State was first to use this term in 2010. Council of Europe adopted first official document, where the term was observed.

‘Occupation’ and ‘ethnic cleansing’ were written in resolution adopted by NATO Parliamentary Assembly in November, 2010. In March of 2011 term occupation was once more observed in document adopted by the Council of Europe and Georgia’s Parliamentary cooperation.

In November 2011, the term ‘occupation’ was for the first time used in an official Council of Europe document, in a resolution about Georgia.