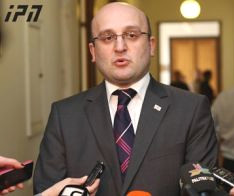 There has not yet been official confirmation that the four have left Georgia’s former ruling party, but party members have confirmed it in private conversations. They do not state the reasons, but say that assessments will only be done after those who left have made statements about their decision.

Those who left ex-President Saakashvili’s party are: Zurab Japaridze, who is party secretary. He joined the party right before the parliamentary election in 2012 and is a member of parliament. He has headed several governmental agencies during Saakashvili’s presidency. He is mostly focusing on economic issues.

Also Pavle Kublashvili has left the National Movement. He has been a member since the Rose Revolution in 2003 and is an MP for the third time in a row. He used to chair the judiciary committee in parliament during Saakashvili and was one of the planners of the constitution reform implemented in 2010, allegedly designed as a way for Saakashvili to cling on to power after the end of his second term. He used to be active representative of the UNM until the very last days.

Giorgi Meladze, who also has been an MP for three assemblies in a row, also left and has been a member of the party since Saakashvili came to power.

Goga Khachidze, who used to be a governor and later environment protection minister during the previous government and who became an MP after the 2012 parliamentary election, has also left the party. He was one of the most committed party members and close to Saakashvili, and even wrote a song for him.

None of the four have commented about their leaving yet. UNM members say they probably will comment on Wednesday, as tomorrow is Georgia’s Independence Day.

However, there is a meeting at the party’s central office and some think they may comment later today.

Members of the National Movement told DF Watch in personal talks that the four plan to continue their political activity separately from the party.

Allegedly, the MPs were planning to leave the party a year ago together with minority leader Davit Bakradze, but since Bakradze refused, they postponed their decision.

There are also reports that another party member, Sergo Ratiani, was planning to leave, but decided to remain a member.

Ratiani said he thinks the others left the party due to pressure.

“There is information and we also know that Meladze, Khachidze, Kublashvili and Japaridze are leaving the party. However, there hasn’t been an official statement. We will comment only after their officially statement to us. For the last three years there has been very serious pressure on our party. It is hard to bear the pressure,” Ratiani said.